I had no idea what project I was working on until I walked into my recording session and saw Kirk Thornton and Keythe Farley who were both voice directing the project. When I found out it was Final Fantasy VII the remake I was beyond thrilled! And did I mention it’s out now!!! Here is a picture of Jessie’s mother, the character I voiced.

The May 2022 Animmersion Workshop is now over!

Presenting the wonderful students from my May 1st-June 5th 2022 Online Animmersion An Animation Voice ActingWorkshop For Actors! Wow! They all read their final 12 characters back to back at our last class and really blew me away with their talent! 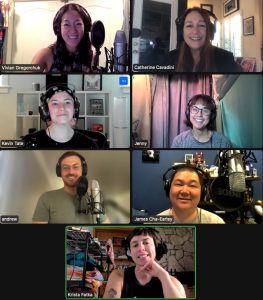 To sign up for the next workshop or to get on a list to be notified when the next dates in May/June 2023 or June/July 2023 are announced: