Catherine Cavadini is an actress, singer, and voice artist perhaps best known as the voice of Blossom in Cartoon Network’s The Powerpuff Girls. Fans also know her as the voice of Glitter in Kidd Video, Clash in Jem, and Tanya Mousekewitz in the movie An American Tail: Fievel Goes West. During her long and prolific career, Catherine’s voice has been featured in over a hundred radio & television commercials, and in over a thousand films, television movies, and series. Currently, she can be heard as the voice of Moby Dee and one of the Bouy’s with Tom Kenny in The Stinky and Dirty Show, the voice of Toodles’ Mom in The Tom and Jerry Show, the voice of Coral the singing sea serpent in Sofia the First, the voices of the aristocrats in Dishonored 2, the voices of Rebel Pilot 5, Takodana Mercenary,  and Village Chief in the Lego Star Wars The Force Awakens Game, the voices of Welch-TV Host & TV Anchor#1 in Incredibles 2 and Incredibles 2 Lego Game, and the voice of Debbie the Marine Biologist as well as several other featured voices in Finding Dory.

Various animated film credits include The Powerpuff Girls Movie as Blossom, Babes in Toyland as Mary, Sky Blue as Jay, Young Shua, and Cheyenne, Batman: Dark Knight Returns as Carol Ferris, Joannie, and Woman with hot dog, Scooby-Doo Legend of the Phantosaur as Faith, My Little Ponies as North Star, and Pound Puppies: Legend of Big Paw as Collette and her newborn puppies. Also, she has performed guest roles in numerous animated series. Some of Catherine’s recent guest roles are Doc McStuffins (Dart), The Cleveland Show (Siri), Batman: The Brave and the Bold (Alanna Strange, Jan, Ruby Ryder, Dr. Myrrha Rhodes), Ben 10 (Cooper), and Teen Titans (Alien Woman/Cironelian Chrysalis Eater). Catherine also originated the series regular roles of Jennifer Jane Parker in Back to the Future, Tanya and Baby Yasha in Fievel’s American Tails, and Mom, Terri, and Mrs. Weebles in season 1 of What’s with Andy.

In the gaming world, she has voiced the roles of Car’l, Twyla, and Candle Maiden in Broken Age, various Nord, Altmer, Bosmer, and Redguard Females in Elder Scrolls, Mechari Female in Wildstar, Kara in White Knight Chronicles 1 and 2, Felicia in War Hammer, Griffin’s Mom, Dr. Hoffstader, and Assassin in Jumper, Valla the Witch of the Tundra, Bolvangar Nurse, and Tartar Leopard in The Golden Compass, Norma Jean in the Happy Feet Interactive Game, Sadie in Gun, and a variety of roles in Final Fantasy X, XIII, and XIII-2.

In addition to animation and game voice work, Catherine has done ADR (automated dialogue replacement) in innumerable movies and television series. Some of the recent movies Catherine has performed additional voices in are Dumbo, The Grinch, Mama Mia 2, Spy Who Dumped Me, Ant-man and the Wasp, Black Panther, Guardians of the Galaxy, Teenage Mutant Ninja Turtles, Transformers: Age of Extinction, Hercules, Jersey Boys, The Lego Movie, The Lego Batman Movie, Twelve Years a Slave, Red 2, The Great Gatsby, and Rise of the Guardians. Listed under the umbrella of “additional voices” are: Pacific Rim (voice of one of the P.A. announcers in the Shatterdome), Now You See Me (reporter voice), Happy Feet Two (emperor penguin voice), How I Met Your Mother (southern teenage mommy), Sleepy Hollow (voice of woman on phone from Oxford College), Fun Size (voice of 911 Operator in the scene with Johnny Knoxville), Bridge to Terabithia (voice of Judy Burke), Book Club(dating app voice), and Ready Player One(voice of the Loyalty Center P.A), and many more.

Throughout her career, Catherine has been honored by and nominated for a number of awards. In 2003, Catherine was recognized with an Epic Award from the White House Project for promoting positive images of women’s leadership through her work in the film The Powerpuff Girls Movie. In 1998, she was nominated for an Annie Award for “Outstanding Individual Achievement for Voice Acting by a Female Performer in an Animated Feature Production” for performing the voice and singing for the role of Mary in the animated movie Babes in Toyland. She also sang “Dreams to Dream” as the character Tanya in the animated movie An American Tail: Fievel Goes West, which was nominated for Best Song at the 1992 Golden Globe Awards. In addition, she has received 2 Emmy Award Certificates for contributing to Outstanding Sound on the television series X-Files.

Presenting the Graduates of the May 2021 Animmersion Workshop! 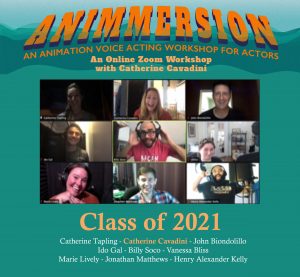 Check Back Here for the Next Workshop Dates in 2022! To sign up for the waitlist for the next class.